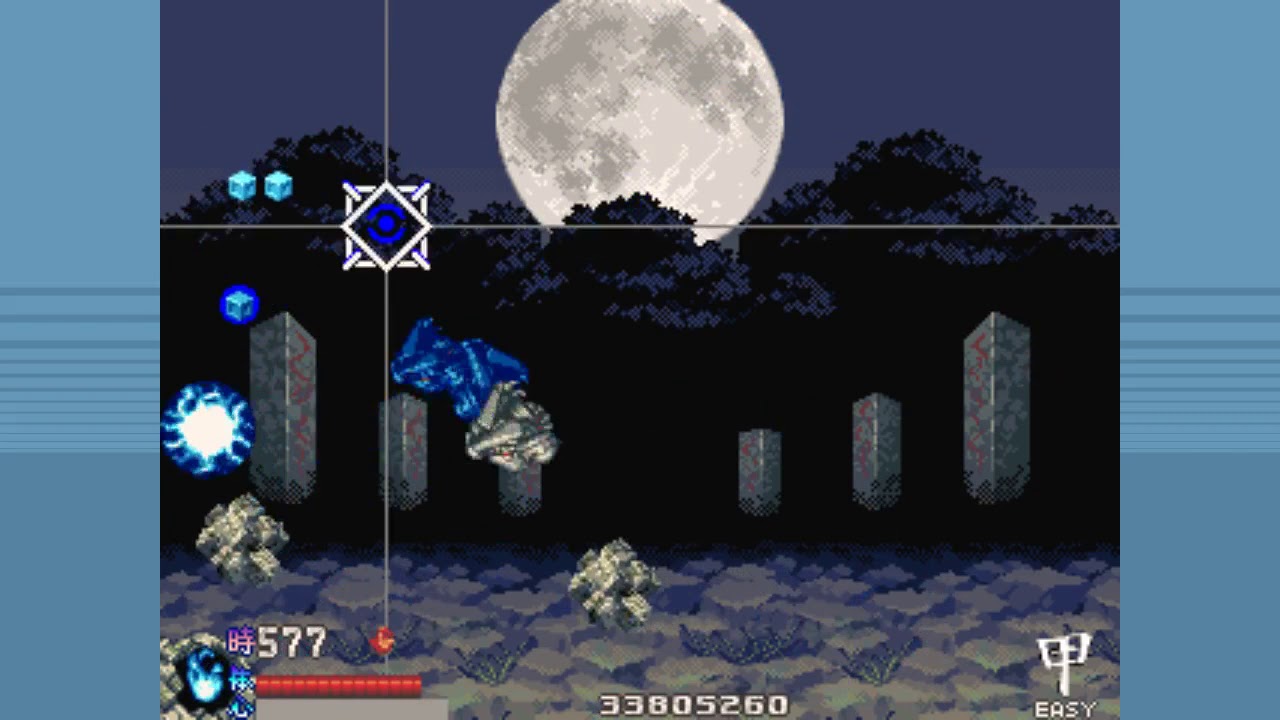 (Yes, a longplay. No commentary.)

(Normal and Hard longplays also on this channel shortly.)

Kitan Iwanaga is one of those Japanese indie games that was kinda lost to time. It’s a love letter to Treasure and I got to write more about it in Hardcore Gaming 101’s Guide to Treasure. I don’t get paid more if it sells, so consider that a freebie, Kurt!

On Easy Mode, mechanics are the simplest: run and gun but you control not only the avatar but their aiming reticle. Red shots appear onscreen instantly and go around cover a la Cabal, Blood Bros, Dynamite Duke, Nam 1975 or other “shoot into the background” games. It’s probably a reference to Sin & Punishment! Yeah, why not? Blue shots are more like projectiles. The more of one color you shoot, the weaker that color gets but the stronger the other one does! It’s kinda like Ikaruga or maybe even Silhouette Mirage. I didn’t play that one, so who knows.

There are no checkpoints or lives whatsoever in Iwanaga, so you have to use the ammo system to replenish health and the timer – when it reaches zero, it’s game over, so there’s a strategy element to the game where you have to manage how much boss health remains and what weapon you want to finish them off with.

Much like Alien Soldier – hey another Treasure game! – you get a Phoenix dash kinda move with wrecks enemies once you fill up the white meter but otherwise dodges bullets. Jumps actually dodge bullets too and that seems overpowered at first blush, but you’ll notice that this game is also kind of a mix of danmaku/bullet hell and run n gun, so you actually need that kinda tech to get through bullet clouds. Sticking the landing is hard enough!

Iwanaga’s story is abstract but it seems to be based off of Japanese mythology in which a half-deity named Ninigi is offered the two daughters of an elder God: Iwanaga and Konohanasakuya-hime. Hey, for brevity, let’s just call her Sakuya! Anyway, Sakuya is hot as hell but Iwanaga is kinda busted I guess, because while Ninigi can marry two women, he’s like “how about just the hot one?”

Unfortunately, Sakuya represented prosperity and gold so the land we live in is prosperous and gives life to crops and such. Iwanaga represented stone and immortality, so unfortunately we die thanks to Ninigi being shallow. Thanks for nothing, Ninigi.

What’s that got to do with this game?

Near as I can figure, there is a remote village in Japan beneath a dam that worships Iwanaga with human sacrifice. You and your sister (maybe?) seem to have wandered in and are about to be sacrificed when it turns out your sister can become a stone mech avatar with magic guns or something. This displeases Iwanaga who attacks the village and you, in various forms always named Old Order.

In the Easy ending, you sacrifice yourself in vain as your sister is recaptured in order to redo that whole sacrifice thing without the gameplay. If you read this far, there’s also Normal and Hard longplays that I’ve got uploaded so enjoy.