A Quick Look At Boogerman On SEGA Mega Drive 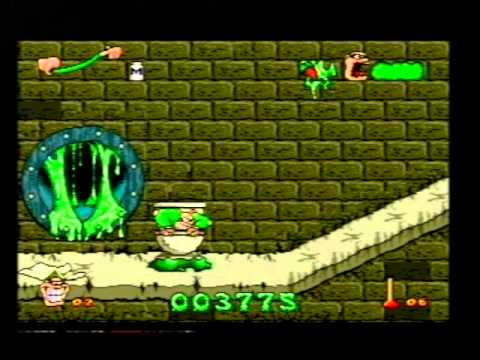 A Quick Look At Boogerman On SEGA Mega Drive

480p is recommended for best Quality.

This game is hilarious!

Boogerman: A Pick and Flick Adventure is a 2D platform video game created by Interplay Entertainment and released for the Sega Mega Drive in 1994 and later on the Super Nintendo in 1995. The Mega Drive version was also released on the Wii Virtual Console in North America on November 24, 2008 and in Europe on December 12, 2008. The game’s lead character also made a cameo appearance as a playable character and the rival of Earthworm Jim in Interplay’s ClayFighter 63⅓.

You will have an adventure in an unknown world as a caped hero who slings his own boogers to vanquish his foes. The hero of the game is a booger-tossing, noisily burping, fart-spewing man named Snotty Ragsdale, a man residing from Medicine Hat, Alberta. While he lives his normal life as an eccentric millionaire, his natural “in-stinks” come in handy when he dons the mask of the smelly hero Boogerman.

Bogey on down to the pick of the action games, as our hero, the Boogerman, tries to clean up the world against the evil Booger Meister. Over 20 bottom burping levels of adventure with worlds like The Pits, Mucous Mountain, Nasal Caverns, Flatulent Swamps, Pus Palace and many more! Attacks include ‘fiery gas; ‘Booger flick’ and the awesome ‘butt wamp; He burps, he farts, he picks his nose and flicks his boogers at enemies, he can even spit suliver towards his enemies and he can also flush himself down toilets to underground sewers. All the disgusting human body functions topped with a hot funky soundtrack and gorgeous graphics rolled into one to make a fantastic action, adventure game on the SEGA Mega Drive.

The object of the game is for Boogerman to collect the many plungers laying around the various levels and the gameplay of Boogerman operates as a simple side scroller, with burp/fart ammunition, as well as booger ammunition. There are 20+ different levels, as well as a final boss battle. Each level consists of a slight puzzle to finish to the end, and to accomplish this it is necessary to defeat foes, unique to each level. Following this boss battle is a fun “sandbox” playable credit scrolling, as you are able to “fly-fart” with unlimited fuel (something you are not able to do during normal gameplay).

This is just a quick demo play of the second level in Flatulant Swamps showing off all of Boogerman’s abilitys.

The game however is quite long when played properly to it’s full advantage and it personally takes me a whole day to complete it as the levels are quite long and an occasional break from play is needed after completing a few levels, so unless you do a speed run, it’s a long game. One day i’ll record a full playthrough of this game.